History of the church

Originally built as a ‘Chapel of Ease’ to Berkeley, it was a narrower version of the present Chancel.  It came under the care of the de Stone family, whose ancestor, Guido, gained favour with the Lords of Berkeley after 1153.  As the family prospered, they enlarged and enhanced the Chapel.

In the 13th Century a nave was added, 85 ft long and 23 ft wide, in Decorated Gothic style, with a deep thatched roof.  The chancel had a priest's door on the South side and an aumbry in the North wall.

Believing that after death the soul would suffer in purgatory, wealthy people endowed chantries where chantry priests would perform a daily mass and say prayers for their rich benefactors.  In 1251 Robert de Stone gave property and land to endow a chantry in Stone's Chapel of Ease, dedicated 'to the Blessed Virgin Mary'.  An altar and piscina (basin for holy water) were set into the South wall of the nave and two Easter Sepulchres (resembling canopied tombs) were set opposite each other in the North and South walls.  The Easter Sepulchres were used during the Easter Ceremonies in the 13th and 14th centuries.

After the death of Thomas de Stone in 1316 his eldest daughter Joan inherited the Stone estate.  After she died in 1357, her widower John Sargeant set up a second chantry in the rood loft above the nave. The spiral staircase in the North East corner of the nave once led to the rood loft, and two small, round windows high up on the East wall shed light on an altar there.  By his death in 1374, John Sargeant had endowed the chantry with 16 properties and 124 acres of land.

In 1388 the four Churchwardens for Stone (John Sargeant, John Guliane, Stephen Hykedon and William Chapman) took the Vicar of Berkeley to court, forcing him to pay for a chaplain to administer the sacraments and services in Stone.  They won their case (see the article above on this website page: Synopsis of Events occurring before and after the Worcester Consistory Court Decree).

The font is 14th Century.

The four small stained-glass windows (with heraldic shields) date from the middle of 14th century.

A battlemented tower and spire were added around 1400.

1579: Gloucester Consistory Court v. the Curate of Stone, John Savage
“He was monished that he is not to say prayers from the pulpit under pain of dismissal”

The thatched roof was replaced early in the 17th century.  In the 1640s John Smyth of Berkeley wrote: “In the last age thatched with broome, now decently covered with lead”.  The outside stonework shows evidence of the steeply pitched thatch over the nave.

1650: during the period of the Commonwealth, Mr Stephen Giles was examined by the Puritan church and found to be “an able minister and honest man”.  By this time the church had lost its rood loft, wall decoration and nearly all its stained-glass windows. 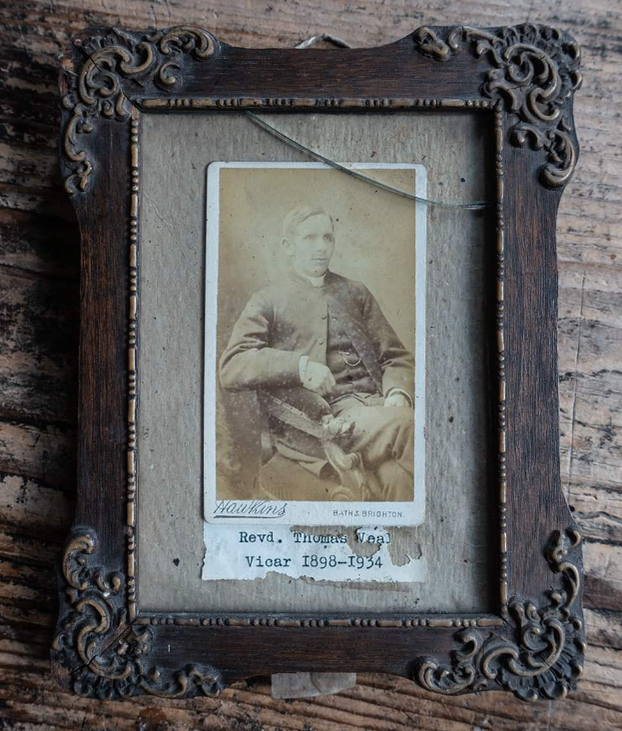 ​
Rev. Thomas Veal, Vicar 1898 - 1934
​
​He copied the inscriptions of the memorials inside the church and tombstones outside in the graveyard, collected newspaper cuttings and took notes about the history of the church and the neighbourhood. 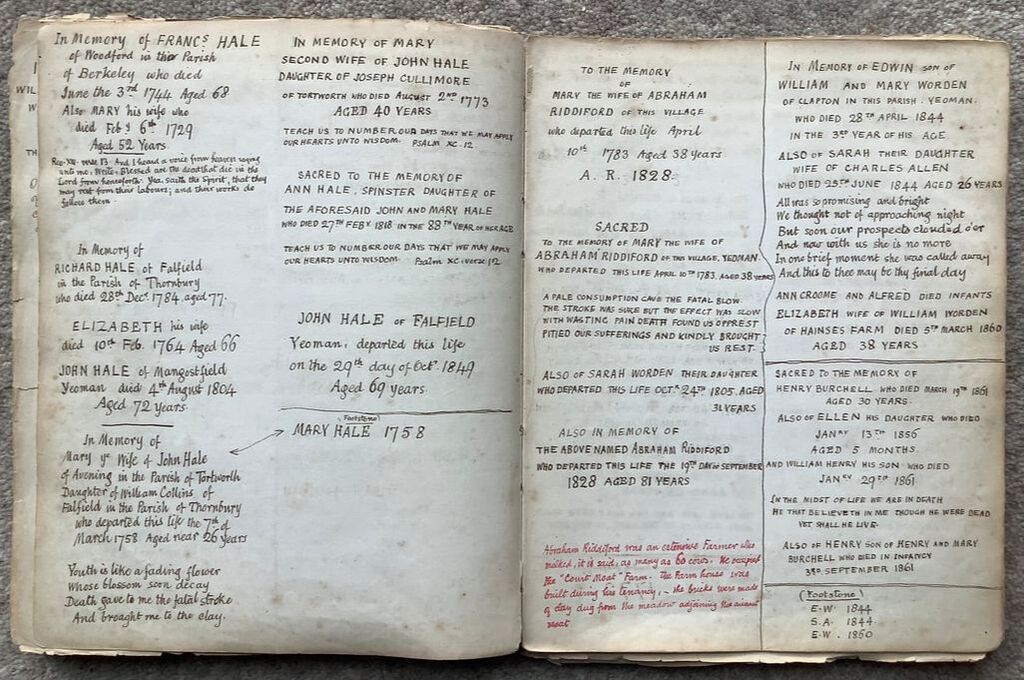 From 'The National Gazetteer' in 1868
The following text and drawing are in "Sketches of churches, with short descriptions' by H. E. Relton, published in 1843

These unusual windows fortunately survived the widespread destruction vented during the Reformation and Commonwealth, probably because they are positioned high up, out of reach for most people.
​
The following is based on information given by Henry Phythian-Adams.
​ 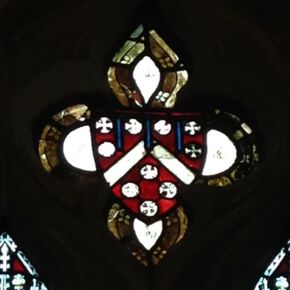 This window bears the chevron and crosses on a red background of the Berkeley family.

It is dated from around the mid 14th century.  It bears the coat of arms of Maurice, the eldest son of Thomas, the third Lord Berkeley: it has a blue label which marks it as his.

Maurice was badly wounded and held for ransom at the battle of Poitiers.  He became the fourth Lord Berkeley in 1361 and died in 1368. 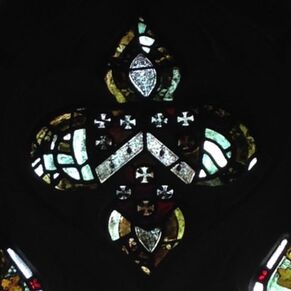 This window  bears the chevron and crosses on a red background of the Berkeley family.  The chevron has ermine spots, which were adopted as a difference by Sir Maurice, the younger brother of Thomas, the third Lord Berkeley.

Sir Maurice was the first Berkeley of Uley and Stoke Gifford, and a hero of the Hundred Years' war.  He  died at Calais in 1347. 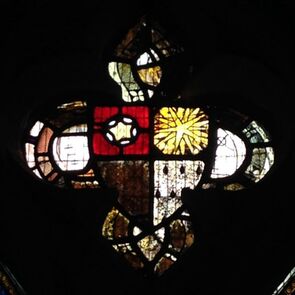 This shield was probably that of Sir Thomas Bradestone of Breadstone, who died in 1360.  It would originally have been a plain glass shield (for silver) with a red square (canton), here shown as the first quarter and bearing a gold rose (as in Bristol cathedral).
​
The 'Sun in Splendour' image is a Medieval badge associated with King Edward IV, who died in 1483.  Such badges do not belong on shields,   It is most likely that during repair of the church someone pieced together fragments of medieval glass, including the ermine quarter and the Sun in Spendour badge, to create a bogus shield. 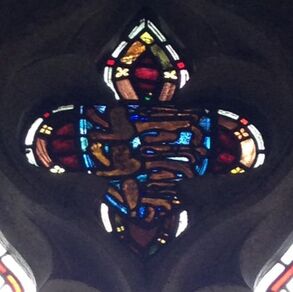 This window shows three gold lions walking along (passant) looking at one (gardant) on a blue background.

The Dursley branch of the Berkeley family were descended from Roger de Berkeley.  He was ousted from the castle by Henry II in 1153.  The castle was granted to Robert FitzHarding (a rich Saxon from Bristol), who then chose to adopt the Berkeley name.  And so there were two separate Berkeley families in Gloucestershire: one of Norman, the other of Saxon descent. 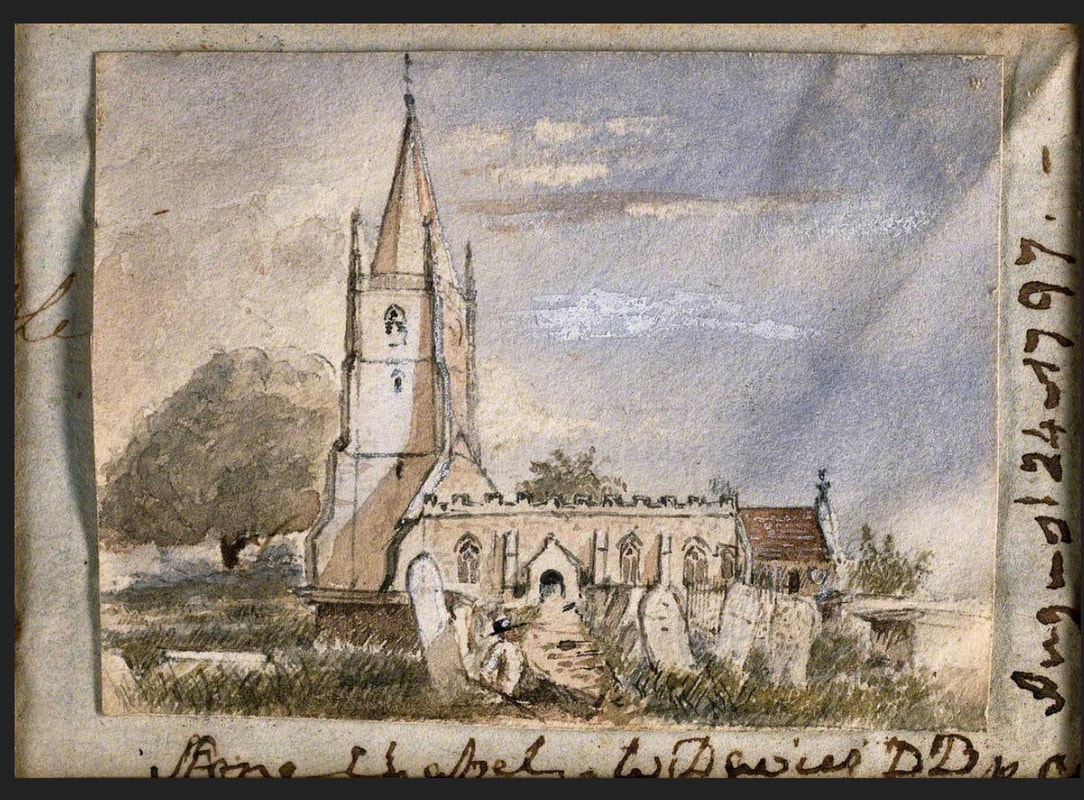 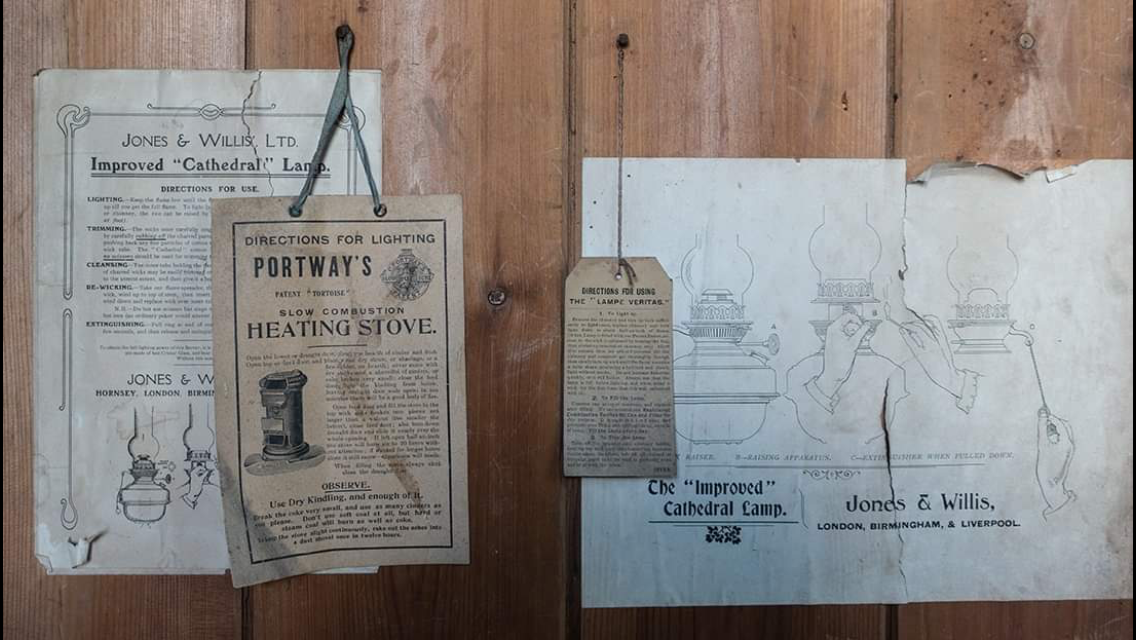